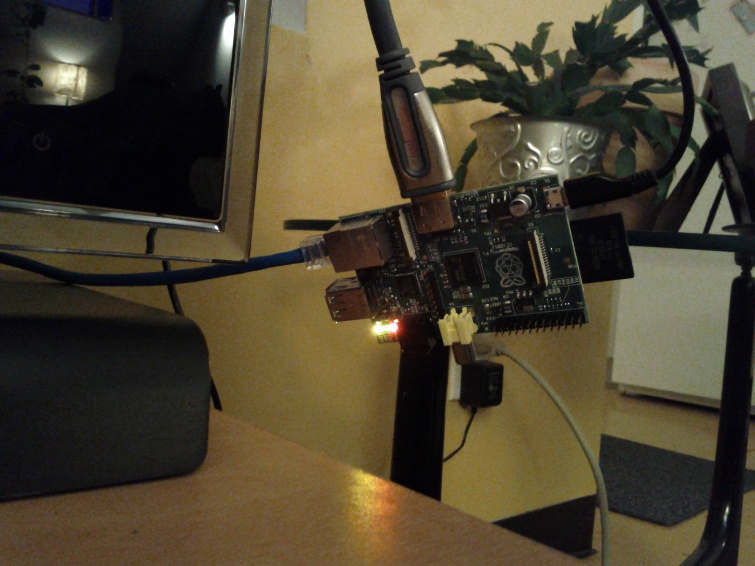 Finally got around to setting up my Raspberry Pi with XBMC and it’s awesome. As I’d hoped, this tiny device completely replaces the media server portion of my road warrior desktop server that’s been running for 7 years (memories!).

I’m not going to get into a long drawn out how to because the documentation over at Raspbmc and Raspberry Pi is stellar and you should be able to find everything you’re looking for over there.

While searching for the best Raspberry PI OS, I ended up using the Raspbmc image and it’s very easy to install. Just insert your SD Card, run this command, and follow the instructions.

The great thing about this script is that it does everything for you: downloads the image, resizes your partitions, etc. Oh yeah, you need to be connected to the internet (of course) and my Pi did not get an IP from my router initially. To work around that, I just plugged straight into the modem for the initial install and configured the NIC afterwards from the shell (which I talk about below because it was a little annoying to get there).

Initially, I installed a different Debian based XBMC image which I won’t name here. It worked fine, but the menus only worked with the keyboard, which felt like a regression. The RC4 Raspbmc image has full remote functionality, so you get XBMC on your TV and you can use your TV remote to navigate. This works when connected over HDMI and if your TV supports CEC. This is key, because there is no way I’m getting another remote.

The interface is very snappy and navigating to movies and music is easy (external drives mounted automatically). Exiting movies seems a bit flaky, and getting to a terminal window is not working very well at the moment. When I exit XBMC, it turns off the TV instead, which might be TV related. Or something.

You can get to that terminal though. It would be nice if you could just CTRL-ALT-F1 or F2 or F3, but you have to hit Exit and then hit ESC when the screen becomes white. This doesn’t always happen but once it does and you get a login prompt, it asks you to configure your keyboard. Then, super annoyingly, XBMC launches again! Highly frustrating. XBMC should have an onscreen terminal that you can access without leaving XBMC. Anyway, it’s a major/minor annoyance depending on what you’re trying to do.

There’s a bit of lag navigating the XBMC menu, and of course you don’t get a case/enclosure for your R-PI (you can print a case!).

Either way, this tiny piece of hardware, this Raspberry Pi thing, is super impressive and once you’re setup, it’s media heaven.