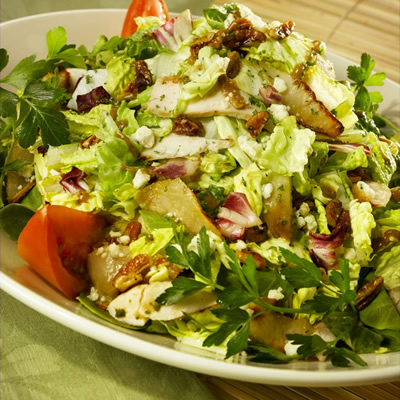 It’s summertime and time for salad!

But you know what? Your salad is nothing without a good dressing. Nothing! Which is why we’re here to tell you how to spruce up your bowl of greens and stuff with a kick-ass dressing that will make you wish you had never bought that crate of Renees Sweet and Sour Hog Sauce.

So let’s get started!

Chop up the garlic cloves real fine like, and do the same thing to the pickled banana peppers. Diced, chopped, whatever. We’re not really sure what the difference is, so just make sure they’re fine and mushy. Then get a bowl and slog in a few healthy dollops of mayo and squeeze in the half lemon. mixing it all together with your favorite fork. You can mix in the peppers and the garlic too, and while you’re at it, chop up those grapes in quarters, or halves. Now mix it all together some more. Don’t stop! Keep mixing!

Now for the pepper.

You can use your own judgment and add a sprinkle, or a teaspoon. Or, you can be like us and open the pepper without looking and start shaking it generously into the bowl, only to realize after 2 seconds that the ‘big hole’ side of the pepper thing was open, effectively dousing the mix with ALOT of pepper. Too much pepper you say? You might say, but you’d also be wrong. The amount of pepper that poured out was actually ideal. Tangy, peppery, and just right once mixed into the salad. In fact, it was a perfect compliment to the arugula.

So yeah, this dressing was a total success. The grapes were like little forgotten pleasures of grapeness that popped up when we least expected it. The peppers added some zest and were not overpowering in the least. Overall, a good creamy tangy dressing to get you ready for summer!