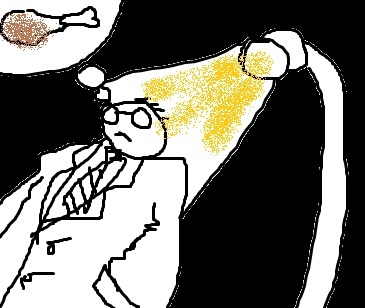 I spent 8 hours fixing the ‘ternets! 8 goddamn hours. With like, 30 minutes for lunch. They even removed my shackles just long enough so that I could go to the bathroom. In the bucket next to my desk!

But I survived. Yes I did.

On my way home, I plotted my victory dinner: I’d throw some cheese tortellini into a pot of boiling water. In a small saucepan, I’d cook up a light tomato sauce, with fennel seeds and dill. A bit of garlic too, with slices of yesterdays shallots. Yes, I deserved this. I’d eat my dinner like a king. With a beer. While watching Lost.

Except I was out of goddamn tortellini!! And tomatoes!

God. How could I be so stupid? Thinking that the freezer was chock full ‘o delectable cheese-filled-tortellini shaped tortellinis. What an idiot  I was. And the water was already on the boil! What was I to do?

I had to think fast.

I checked the time: 8:50pm. Lost would be starting soon and I needed to eat. No, prunes and sour cream would not suffice. Not this time!

I looked in the pantry. Half a bag of Rotini! I threw it in the pot. But dammit…no time for sauce. No time!

Then it hit me.

Tuna. A can of tuna was definitely going in the pasta. In fact, the pasta was ready. A little Al dente, but ready. The after boil will take care of it.

I strained out the pasta, threw in the tuna. Will fennel work? It goddamn better, so I took the chance of my life. I mixed in the fennel and the dill, but it was all too dry, so I went fucking crazy.

I added a teaspoon of mayonnaise. And you know what?

I was totally starving, but it was perfectly edible, filling, and flavorful. Do not ever underestimate the power of fennel and dill.

One thought on “Supper Salvation”