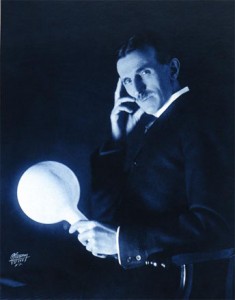 July 10th marked what would have been Nikola Tesla‘s 153rd birthday had he lived that long. We figured that a small tribute was in order to the man who many credit as single-handedly bringing us into the modern electric age.

In his lifetime, he held hundreds of different patents for various inventions, many of which are in use today in various incarnations. Typical of the genius he possessed, he was also super mega-eccentric.

Aside from inventing Alternating Current and the Induction Coil, Tesla also proposed a crazy particle beam Death Ray weapon. Essentially, he was the ultimate genius/mad scientist who was often disregarded as a complete crackpot due to his eccentric nature. As such, Tesla died completely destitute even though he had sold his patents.

So Happy Birthday, Tesla! Without you I probably wouldn’t even be typing this less than inspired tribute to you. That’s probably not true, but your inventions certainly helped jump start the electric revolution.