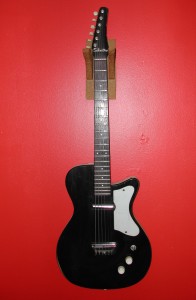 A few years back, I walked into a used guitar store in Montreal, Quebec intent on buying a Fender Telecaster. I always loved the tone and versatility of the Tele and it’s shape fits me well. Plus, it’s the perfect weight for me, unlike those Gibson Les Paul’s which are known to be back-breakers. So I tried out a few vintage Tele’s, but they were between $1500 and $3000, which was slightly out of my budget. Yeah, just slightly 😉

Then I spotted a couple of Silvertone‘s which caught my eye due to their black/white retro look (retro today, modern in 1960). I had sort of heard about Silvertones, but never really paid much attention to them. 90% of us guitar players have our hearts set on either a Fender Stratocaster or Gibson Les Paul from the first time we saw Eric Clapton (that racist!) slowly stroking them notes, or Jimmy Page going tone-crazy on Whole Lotta Love. The truth is, these guitars are their most photographed showpieces, where their studio instruments vary greatly. Anyway, enough about that. Let’s get to my Silvertone.

The first thing that surprised me was the weight of it: light as a feather. The body is hollow and was made from the cheapest materials at the time, like masonite and poplar wood. When I first held it, I thought that it really is ‘this close’ to actually being a total piece of crap, but the Silvertone I played (and eventually bought) just felt right and sounded great.

Pickups
Just about anyone who knows anything about Silvertones have heard about the pickups. As a budget guitar (back in the 60’s), the guitars were sold for like 19.95, and were built cheaply. The pickup casings are used lipstick tubes which have a really nice warm tone. The pickups are now highly prized, and many artists have been known to buy old Silvertones just to transplant the pickups into another guitar. Check out the History of the Danelectro. 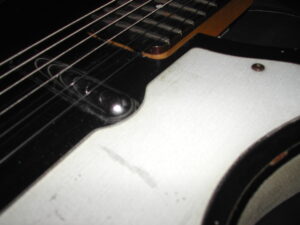 The action is also high and the strings are quite tight. Don’t ask me what gauge I use since I’ve left the original strings on. I’m too scared to replace them for fear of losing some of that sweet, sweet tone, but I’ll get the gauge measured at some point. Slide guitar sounds awesome on it, whether I use an amp or not and thanks to the hollow body, this Silvertone resonates well as an acoustic guitar.

The tone switcher is actually quite limited. You can barely hear an audible difference no matter what position the switch is in, but no matter. I have a number of guitars in my collection, and I’ve designated the Silvertone as my ‘openly tuned, blues/folk guitar’. If you want to know, I have it tuned to DADGBD.

The Specs (I don’t know anything about it except the year, so let’s make up some specs)
1960 Silvertone
Tone: awesome
Strings: I have no idea
Used for: Blues and Folk

So there you go. I have since picked up a nice Japanese Tele which I may or may not review here. For now, keep on pluckin’!

4 thoughts on “I Love My Silvertone”