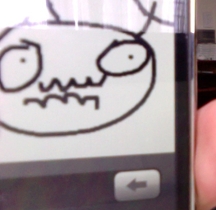 Hi! I haven’t had much time or motivation for a big professional post on the level of quality with which Dr. Dobson writes. But I’ve been thinking about you my dear reader, oh yes I have. In the past month I made the acquisition of an iPhone and man, it is everything they say it is, AND MORE. It’s embarrassing how many apps I bought so far. There are so many great ideas on the app store, it makes it almost impossible not to find something to download every time you go. Long story short, I got a lot of very cool games to talk about. On the Nintendo DS front things have been a little more quiet lately but I still have a few games I wanna mention.

I’ll start with Aurora Feint II – Arena Daemons. If you enjoyed PuzzleQuest, this one will not disappoint you. It’s yet another Bejeweled based fighting RPG, but the gameplay is much deeper. It’s got PvP a la Mafia Wars, mining, crafting and a sleek chat interface. The artwork is gorgeous and the music is also very rich. Available for $4.99, the pricetag is a little steep for an iPhone game, but the product is worth every cent.

Another expensive iPhone app that’s worth the money is Galaga REMIX ($5.99). If you’re a fan of arcade shooters, there are no other alternatives that I know of. Surprisingly, the touchscreen controls are very smooth and responsive. The game also offers a classic mode that reproduces the original arcade Galaga experience flawlessly.

OK… this next one is even more expensive and maybe not worth the price. I Love Katamari is the iPhone iteration of the Katamari Damacy games. I always was a huge fan of the basic concept. This version is a bit laggy and the controls aren’t top notch but it still delivers (fun physics, item collection, etc). You can get it for $7.99. Ouch, I know.

Another tower defense game that I enjoy a lot is Square Enix’s own Crystal Defenders. Based in the Final Fantasy: Crystal Chronicles universe, it’s a beautiful and fun take on the genre. I like how the mechanics are a bit deeper than what you usually find in such games. It’s another $7.99 game though, I know I know! I’m starting to realize how much cash I spent on those damn games…

Here’s a free one for a change. Trace is as fun as it is ugly. The MS Paint art style doesn’t stop this little platforming puzzle game from being a pure gem. I was surprised how smooth the controls are. And yes, it really is 100% free 🙂

SuperMarket Mania is a time management game that reminds me how I felt the first time I played The Sims (super excited and a bit guilty cuz it’s totally a chick game). The synopsis is simple: you gotta re-stock food displays and clean up after the customers as fast as possible or else you lose money. If you have $2.99, spend it on this.

Last game I wanna recommend for the iPhone is Tap Tap Revenge 2. The game is a mini Rock Band/Guitar Hero clone that uses the motion control features of the iPhone and provides new songs to download every week. When you see the price tag on the games I mentioned earlier, it’s hard to believe this one is totally free. The quality is top notch and it’s one of the games I find myself returning to the most. Download it now.

Now for the DS I wanted to mention a few games I’ve been playing, starting with Rhythm Heaven. This collection of rhythm based mini games is fucking awesome. The only complaints I’ve heard about it so far is “The gameboy version was so much better”. Not a valid point in my book.

I’ve also been playing Space Invaders Extreme. Best damn arcade shooter on the DS, period. It’s got many exciting modes, the action is fluid, the boss fights rock, the graphics are like a collage of classic Space Invaders sprites with weird psychedelic artwork in the background. It is a very tight package and I recommend it.

Although it’s been mentioned again and again as the overlooked wonder of 2008, I can’t stress this enough: The World Ends With You is an incredible non-fantasy RPG by Square Enix that everyone should know about. The game mechanics are bold and the artwork is fresh. The story takes place in modern day Japan, in the Shibuya area. Our friend Wikipedia says: “Shibuya is known as one of the fashion centers of Japan, particularly for young people, and as a major nightlife area.” The developers took those characteristics and turned them into gameplay. And they totally pull it off. As well, the combat system is so unlike anything I’ve seen before, and it works so well, the game is worth a look just for that.

Well that’s it my friends. I’ve been working on a full Mint Linux review and it’s going nowhere, but I’ll try to post it anyway. Also, I’m almost done with GTA4 since I’ve got like one mission left. I wanna blog about that as well. And since I might be getting a car soon (my very first car!), I’m gonna be test driving a couple of models in the upcoming weeks. Who knows, maybe I’ll have something fun to write about that experience.

Until then, you take care of yourselves.