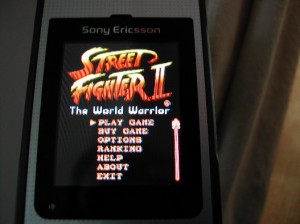 I’m not a big fan of cell phone games, but imagine my surprise when I discovered that my W380 came bundled with Street Fighter II. I spent many hours losing at the arcade version back in university, and seeing the splash screen again, well, it brought me right back to those heady 90’s, killing time between classes at the smoky campus arcade. Street Fighter II stood next to Tetris, my first love. So different they were from each other, yet there they were: sitting side by side like an old married couple. One full of rage, gin and cheap cigars, while the other sits quietly, plotting to keep the house clean of colored blocks while waiting for the roast to finish cooking. A match made in heaven, or a Las Vegas chapel.

Because this is a demo, you can only choose Ryu, while the other characters are only available in the full version. Playing a 2 person fighting game on a cell phone is not easy, or very entertaining. Don’t get me wrong. I love my W380. I love the flat buttons and it’s sleek design. But flat buttons are NOT conducive to executing those cool combo moves. I was barely able to jump up to avoid Guile‘s Sonic Boom ™, and he had me beat in about 10 seconds 🙁 That said, I haven’t been able to pull off Ryu’s Dragon Punch either.

Surprisingly, even for a demo, you only have 1 chance. You suffer one beat-down, and that’s it. The thinking behind this is likely that most people know the game already, so they’ll either buy it or steal it if they really want it. But who would want to?  The playability is awful on a cell phone. Still, the developers and/or management could have tried a little harder to tempt us, but no. They chose the very lame road.